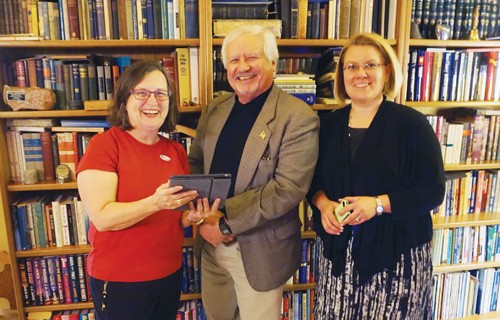 Incumbents Julie Pierce and Jim Diaz and newly elected Tuija Catalano keep track of election results at an election night party at Pierce’s home. All three were elected to the City Council by a decisive margin.

Clearly pleased with their performance,  Clayton voters sent incumbents Julie Pierce and Jim Diaz back to the City Council for four more years. Planning commissioner, Tuija Catalano won the seat vacated by Howard Geller who elected not to run for a third term. The three join David Shuey and Keith Haydon who each have two more years left on their current terms.

Pierce has served on the Council since 1992. She also serves on the Contra Costa Transporation Authority and is president of the Association of Bay Area Goverments.

This will be Diaz’ second term. He has a background in law enforcement and security. He previously served on the planning commission.

All three list downtown development as a top priority.

Pierce hosted an election night party at her home where the three candidates, friends, family and officials from local agencies and surrounding cities awaited election results.