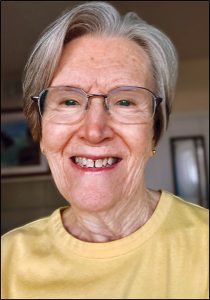 Sandra Jean Holmquist was born in Cheyenne, Wyo., on July 3, 1936. Her dad worked at the maintenance base for United Airlines. She vividly remembered the garden with the giant dahlias. She loved flowers forever after and created beautiful arrangements.

The family moved to Redwood City in 1947, and Sandi was part of the first class to graduate from Menlo-Atherton High School. She went to San Jose State for three years and graduated from the UC San Francisco School of Physical Therapy.

During her time in San Jose, she met and married Stanley William “Bill” Watson Jr., who worked at US Steel in Pittsburg. They subsequently moved to Concord, where they built a new home and had their first child, David Stanley Watson. Three years later, they adopted Elizabeth Ann Watson (now Beth Perino).

Busy times followed, with many pets, gardening, school activities and travel. For many years, Sandi worked part-time as a physical therapist at a school for physically handicapped children.

In 1963, the family built a home in Clayton, where Sandi lived for 44 years. Sandi and Bill worked until retirement and had some amazing trips, including bicycling along the Rhine River in Germany and wine tasting in Italy.

After Bill died of esophageal cancer, Sandi filled her time with family, friends, travel and volunteering as a teacher of English as a Second Language and reading, primarily to Spanish-speaking adults, and weekly work at the Clayton Library. She also took up golf and was active in the local American Association of University Women (AAUW) branch.

Sandi met and married Robert Carl “Bob” Robinson in 2006. Bob and Sandi moved to the Davis University Retirement Community and spent 15 wonderful years together. They traveled frequently across the United States and stayed in bed and breakfast inns around Northern California on a regular basis.

Sandi continued to contribute to the community, including leadership and growth of a program that provided backpacks and school supplies for underprivileged children. She was an optimistic, pragmatic and sharp-witted woman, and we were fortunate to know her during her time with us on Earth. She will be remembered lovingly and sorely missed.