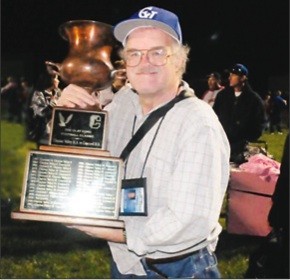 Michael Dunn, the popular photographer for the Clayton Pioneer and local blog Claycord.com, died in his sleep Christmas Day after a year-long battle against liver cancer.

Dunn, widely known in the area as “Radar,” had an uncanny ability to be first on the scene of breaking news. A slideshow of his best work for Claycord.com with comments by the editor is posted at that website.

Dunn, 59, was born March 27, 1953 in Oakland. He was raised in the Concord area and graduated from Clayton Valley High School in 1971. He attended Los Medanos College where he studied graphic arts and journalism. He was a familiar face around the CVCHS campus where he photographed reunions, student activities and sporting events and was on assignment there for the Pioneer on December 19 when he collapsed and was taken to the hospital by ambulance. He died a few days later.

A 5 p.m. visitation planned at Ouimet Brothers Funeral Chapel in Concord on Dec. 30 was abruptly relocated to the Concord Salvation Army church across the street after a car crashed at high-speed into the front of the building during an earlier service. The irony of the timing did not escape his friends.

“As always, Radar was first on the scene,” commented Pioneer staffer Pam Wiesendanger.
Dunn has been a part of the press world for most of his life, logging stints at the Contra Costa Times, The Concordian and Patch.com in addition to photographing for the ­Pioneer and Claycord.com.

He is survived by his sister Paula Barrett of Vancouver Washington, a niece in Occidental California and a nephew in Washington.

Plans are underway for a memorial service later in the month. Details will be posted on claytonpioneer.com and claycord.com.