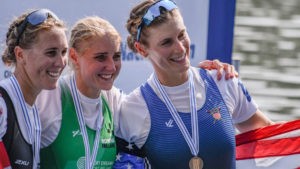 The U.S. qualified eight boats for the Olympic Games including women’s single sculls with Kohler and all four boats for the Paralympic Games, while winning six medals to finish in a tie for fourth in total medals.

In the women’s single sculls, New Zealand’s Emma Twigg took the early lead ahead of defending world champion Sanita Puspure of Ireland, Great Britain’s Victoria Thornley and Kohler. The American moved into bronze-medal position during the second quarter of the race, passing Thornley as the scullers approached the 1,000-meter mark.

Twigg continued to lead Puspure through the third 500, but the Irish sculler was beginning to close the margin. At the same time, Kohler was extending her advantage over Thornley to take command of third place. In the final 500 meters, Puspure pulled away from Twigg to win by more than three seconds. Puspure finished in a 7:17.14, with Twigg crossing 3.42 seconds later in a 7:20.56. Kohler won the bronze medal in a 7:22.21.

“I’m happy to finish off my season on the podium for the first time in the single,” Kohler said. “First half (of the race), Emma shot out — couldn’t even see her. I felt Sanita on me, so that was hopeful for me. As long as I can stay in touch with Sanita, I should be in a good position. It’s pure relief and confirmation that the training I am doing with Laurel (Korholz) and Tom (Terhaar) and the training center group is working so far, and I only look forward to what I can build off of this year.

“Last year was my first season in the single. I had a good world championships and I made the A final. That was my main goal. Ended up in fourth place, so I was pretty happy about that but I’m definitely hungry for more and knew I had more speed to work on over the year.”

Kohler won a bronze medal in women’s quad at the 2012 London Olympics. The Clayton Valley High School and Cal Berkeley grad wasn’t selected to compete of the USA in Rio Olympics but has her sites set on making it to Tokyo next summer.