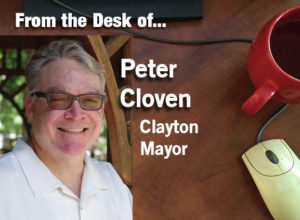 CLAYTON, CA (Sept. 16, 2022) — Clayton is in transition, and our city has been thrust into change these past four years.

A caustic 2018 election caused significant changes in the City Council and city staff. The retirement of long-term city manager Gary Napper gave way to the hiring of four city managers (two of them interim) in the past four years. We have seen three community development directors, three finance managers and two police chiefs.

The hiring of new personnel has been especially difficult due to a pay scale that is on average 20%-40% less than surrounding communities and corresponding labor shortages in a booming economy.

Since 2018, we swore in four new council members. During this transition, COVID moved us to virtual meetings – preventing personal interaction.

National civil unrest became local in the form of two Black Lives Matter demonstrations in our city in June 2020. Upon council proclamation, we raised the Pride flag that same month on city flag poles.

Through these experiences, we learned that Clayton is a microcosm of the polarity that exists in our national politique. The lack of civil discourse gave way to profanity laced public comments during council meetings in 2021.

The keys to strong leadership

With all the new personalities in staff, council and the Planning Commission, change is also bound to occur. As we get into this election season, a couple candidates and a small group of perpetually dissatisfied residents have lofted the topic of “leadership” into the campaign dialogue. Some of these calls for leadership come from those who haven’t been engaged in the public process and haven’t presented solutions.

However, strong leadership is occurring. I believe that leadership doesn’t need to be a bellicose, charismatic voice that brings attention to self, but rather the strong rudder that steers the ship in a future direction. Much of Clayton’s character is rooted in our city’s motto “Do The Right Thing” and all the character traits that it embodies.

During my past eight months as mayor, I have sought to bring back that civility into city dialogue and encourage others, including current council candidates, to do the same.

Instead of pushing for a tax measure on this November’s ballot as some suggested, the council listened to a poll of the citizens. In June, we passed a budget 4-1 that uses federally granted America Rescue Plan Act (ARPA) funds to provide a temporary patch until our revenue shortfalls and corresponding city expenditures can be addressed.

I continue to push for a citizens’ budgetary advisory committee to review our budget shortfalls, provide perspective to assist with future solutions and communicate with their fellow residents as “trusted advisors.”

We creatively addressed Sacramento’s mandate to zone 570 new units of housing as part of the next Housing Element. It is the council’s leadership that sought transparency to inform interested, engaged residents in this process through numerous polls, meetings, software tools, publications (print and social media) and the delivery of door hangers on every residence in Clayton.

As a council, it is our responsibility to provide direction to city staff through the city manager. We hired our current city manager in December 2020 after another particularly caustic election cycle. Since then, Clayton has hired new community development and finance directors. New employees immediately dove into arduous, time-intensive tasks (e.g., audit, housing).

We have also retained a new city engineer. We appointed a new, nine-person Trails and Landscaping Commission, and our maintenance department is tasked with addressing landscaping concerns.

I, like my fellow council members, am in constant communication with our city manager and appreciate her efforts in meeting our citizen’s needs. I am confident in the leadership that I am providing as mayor, the decisions being made by council and the efforts made by our small, but mighty staff.

While there will always be challenges, the future of Clayton remains bright.