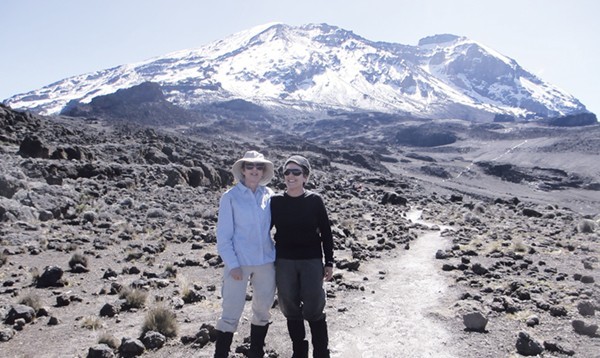 In her new book, “Lean In,” published this month, Facebook exec Sheryl Sandberg tells women to “own their power.”

Chris Smith and Sue Elliott could have been the cover girls for Sandberg’s book. The 60-something women have been friends since 1987, sharing a love of volleyball, the outdoors and long hikes.

Last month, the two seriously powered up and leaned in with an eight-day trek up the steep slopes of Tanzania’s Mt. Kilimanjaro. At 19,341 feet, “Kili” is the highest mountain in Africa and the highest free standing mountain in the world.

The two have on taken on some pretty challenging hikes over the years. They’ve done the Grand Canyon National Park, rim to rim, climbed Mt. Tallac in Lake Tahoe, Half Dome and Yosemite National Park and as part of their training for the Kilimanjaro climb, they covered all four peaks in Mt. Diablo State Park in one day.

But, Kili was different. First, it was bigger. Second, it was higher than anywhere they’d hiked. And thirdly, it was very far away. This trip would take more than a trail map and backpack.

They started researching trekking companies last September. First up was a bargain deal Chris found on Living Social. The price was right, but Sue had doubts and her instincts were right. That company had not yet successfully led a group to the summit. “We essentially would have been their guinea pigs,” she said. They finally settled on a company with a long track record and a nearly 100 percent success rate. It wasn’t cheap. Sue said, but this “really wasn’t the time for a bargain hunt.”

Mt. Kilimanjaro is the tallest mountain in the world that you can “walk in.” It isn’t considered a “technical climb,” Sue explained, meaning no ropes or crampons are necessary. Still, the mountain is a challenge, if only because of the altitude.

Once they settled on a tour company, the next decision question was which route up the mountain. The five day route to the summit was the shortest, but it also gave them the least amount of time to acclimate to the altitude. Neither had ever suffered from altitude sickness, but neither had they climbed to almost 20,000 feet before.

They settled on the eight-day hike. At 42 miles, it was the longer route, but offered a more gradual ascent.

Their climb began at 6800 feet in the rain forest on the west side of Kilimanjaro. They set off in the early morning mist with four other hikers – a couple from London and two doctors from Detroit – four guides, two servers and one toilet engineer. In the next eight days, they would pass through five different climate zones.

At first it was difficult to pace themselves. “We wanted to go faster, but the guides kept saying ‘pole, pole’ – Swahili for slowly, slowly,” said Chris. It was important to conserve their energy for the challenges ahead.

Each morning began at 6:30 when the porters brought hot tea and the warm water and dishpans that would be the closest thing to a bath they would see for days. “We went through a lot of baby wipes,” Chris laughed. By 8:30, they were on the trail.

On the fifth day, at 15,000 ft’, they hit a wall – literally. Between them and the summit was an 800 ft. scramble up the Great Barranco Wall and a slippery descent into the Karanga Valley below.

“I love the scrambles,” said Sue. “I’m like a squirrel; I just jump from rock to rock.”

Chris moved a little more carefully, waiting for step-by-step instructions from her guide while the porters, with their 45 lb. packs, “leaped ahead of us like antelope.”

Push to the top

Another day and a half of hiking would bring them to the Barafu Camp where all routes converge before pushing to the summit. Dozens and dozens of tents crowded together as hikers tried to rest before taking on the summit.

Their final 5-mile, 4000 ft. ascent began at midnight on the sixth night and they would be on the summit at sunrise. With headlamps and a full moon, the trail was easy to follow, said Chris. But it was rough. The summit trail is all gravel, making the high-altitude even harder. Both women were getting pretty tired by this time. And it was cold.

“I get how people can just sit down in the snow and freeze to death,” she said.

Two miles into the ascent, Sue’s legs finally gave out. “I was beginning to hold up the others,” she said. “I’ve always had trouble with my legs recovering and I knew it was time to turn back.”

Breathing hard and feeling foggy, Chris pushed on, arriving at the summit just as the sun was coming up. “You are above the clouds among the glaciers and everything turns yellow, gold and orange. It was breathtaking.”

Victory was short, however. The guides gave them only about 15 minutes at the summit – time enough to catch their breath and get a picture. Then, it was back down to Barafu in time for lunch and tea. The next day, it was downhill all the way to the showers, a day or two of rest and then another 8 days on the Serengeti and touring Zanzibar before a 31-hour flight home. All in all, the two were together for 22 days, from January 18 to February 8. “And we’re still friends,” laughed Sue.