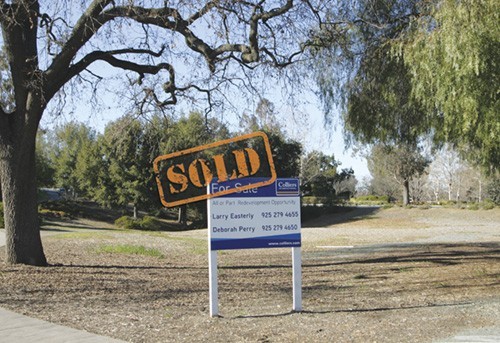 The city of Clayton and the Clayton Community Church finalized a deal last week that both sides called a win/win. The city will purchase the larger of the church’s two downtown parcels – 1.66 acres between Main Street and Clayton Road – for $1 million. They also received a first right of refusal to purchase the adjacent smaller parcel where the old Pioneer Inn houses church offices and meeting rooms.

The deal will assure the future commercial development of the Town Center and allow the church to complete the purchase of a 4.5-acre building site on the hill next to Mt. Diablo Elementary School – a site Robinson says is less controversial and better suited to the needs of the church.

The $1 million purchase price and $30,000 in closing costs will come from the city’s Downtown Economic Development Project Account, from interest earnings and from some other project savings.

The purchase will “severely limit” the city’s budget for future improvements, said City Manager Gary Napper in his staff report, but it allows the city to regain control of one of the last undeveloped parcels in the Town Center.

In 2003, CCC bought the smaller .64-acre parcel for $340,000, and renovated the old Pioneer Inn building to house their administrative offices. In 2006, the church bought the adjoining 1.66 acres for $1.4 million and made plans to build a four-building, 42,000 square foot worship center covering the whole 2.3 acres.

But, the use was not in compliance with the Town Center Specific Plan (TCSP) which calls for commercial development in the town center, and resistance to the project reached the boiling point when the Environmental Impact Report detailed the parking and traffic issues that the project would create.

“It was a public relations nightmare,” said one source close to the church, who asked not to be named. “The last thing a church wants is that kind of ­controversy.”

By moving their plans to the hillside property, Robinson hopes to quiet the controversy and become the “blessing to the community” that he has said he always wanted to be.

The hillside property will present both opportunities and hurdles, said Robinson. By building outside the Town Center, they won’t be required to construct the more expensive two-story buildings nor provide the retail space required by the TCSP

And the hillside parcel is big enough to keep all parking on site. This was a huge hot button with the previous plans which relied on public parking to meet their parking requirements.

He expects to work with the school district to plan a shared agreement which would increase parking at MDES. He believes access from Oak Street will help relieve before- and after-school congestion. However, engineering the hillside and constructing a bridge to give the property Oak Street access will be a challenge and expensive.

Robinson says he has met with little resistance from the neighbors at the new site. Charmetta Mann and Janet Easton who live directly across Pine Hollow Court from the new church site were initially opposed to the idea. But, they feared the property would be sold to a developer for high density housing and say the church is a better choice.

“It’s a one story building and won’t block our view of the mountains,” said Easton. “And it’s better than a 30-unit condo project.”

The church expects to close escrow on the 4.5-acre hill property by June 15, but they still need to raise another $350,000 to cover the closing costs.

“For everyone that didn’t want the church downtown, this is your chance,” quipped Robinson. “You can help us raise the $350,000 we need to close on the new property.”