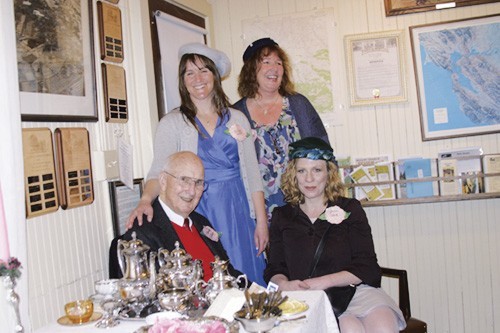 The Clayton Museum opened its doors last week for the 36th Annual Camellia Tea, an event honoring the descendents of Clayton’s settlers and pioneering families.

The little house on Main Street, which was once the home of Joel Clayton, was elbow to elbow with nearly 100 visitors on Sunday, Feb. 10. Tables in the back parlor were laden with home baked pastries and cookies. Every available surface was adorned with the seasonal camellias that give the event its name. Tea and coffee were poured from silver pots into antique china cups. The docents and volunteers all sported colorful hats from the museum’s extensive collection.

The event has been a traditional annual gathering – almost a family reunion – for dozens of descendents of the town’s early settlers since 1977.

Joel Clayton and his wife Margaret settled here in 1847 and had nine children, only four of whom survived childhood. Joel died of pneumonia in 1872 and Margaret moved to San Francisco to live with her daughter. Joel and Margaret and two of their daughters are buried in Live Oak Cemetery near Clayton.

The museum is supported by the Clayton Historical Society (CHS) on an annual budget of about $25,000. The CHS sponsors several fundraisers each year including the Christmas Home Tour and the spring Home and Garden Tour, which is set this year for May 18 and 19.

This spring the museum gardens will see a complete renovation, says JoAnn Casper, president of the CHS. The drawings and plans are complete and waiting for approval from the city. The CHS has managed to save over half of the $25,000 cost and will sell bricks for the new wall and sponsor more fundraisers to complete the project.

The Clayton Museum, 6101 Main Street in downtown Clayton, is open Wednesdays and Sundays from 2-4 p.m. and by appointment. For more information on the Clayton Historical Society go to claytonhistory.org or call (925) 672-0240.­