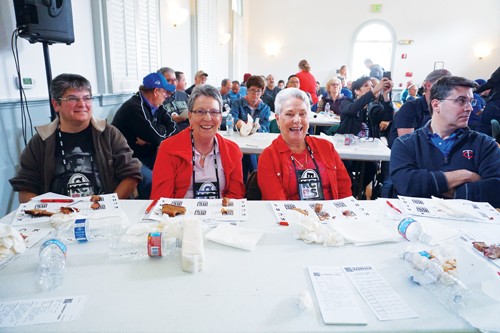 Carol Herington and Jeanne Boyd (in red) are barbecue aficionados, and thanks to the KCBS class, now official judges. The two were among the 60 who attended the class at Endeavor Hall to become certified BBQ judges.

Nationally renowned barbecue judges Kelly McIntosh and his wife Kathleen want to make a few things clear: Good barbecue means not trying to make the cover of Food and Wine magazine. A barbecue competition isn’t a sauce competition. And no matter how bad something may look, it’s how it tastes that counts.

That was some of the wisdom the San Diego couple dispensed at Clayton’s first barbecue judging class, put on by the Kansas City Barbecue Society (KCBS). The Clayton Business and Community Association (CBCA) sponsored the event, but participants paid to get their coveted barbecue judge pin and the chance to judge competitions worldwide.

The class was held as the CBCA prepares for its annual Rib Cook-off, an event that has had tremendous success over the past six years. More than 60 wanna-be judges spent Saturday, May 21, at Endeavor Hall, doing the very difficult task of tasting meats prepared by some of KCBS’s finest chefs, including celebrity chef Donna Fong and her “assistant,” Big Tom Sharp of Oakland.

“Given the packed house, and the enthusiastic response from those who attended, we can say that our 2016 barbecue judging class was a smashing success,” said CBCA president Bob Steiner. “The national recognition and credibility this will lend to our annual CBCA Rib-Cook-off are immeasurable.”

While many students were taking the class to get a leg-up on the competition in the Clayton and other rib cook-offs, others just wanted to hone their barbecue skills.

“I’m a barbecue aficionado,” said Clayton’s Carol Herington. “I travel with family and friends, and we just love barbecue.”

Concord’s Mike Felt said he was taking the class to learn more about the judging process, since he has won several amateur contests. “Every judge has a different palate, so I want to learn what to look for.”

The McIntoshes taught the class what to look for, from presentation to appearance to tenderness to taste. For instance, the class learned that ribs that fell off the bone were undercooked, and that red-leaf lettuce was an automatic disqualification. There are strict KCBS rules on what can be used as garnish, and while cilantro is in, cabbage and certain lettuces are out.

Judges use a specific scoring system, looking at how the meat is presented, how it how tender it is and how it tastes. They rate 2 to 9, with 9 being “excellent” and 2 being “inedible.”

“There is no such thing as ‘perfect,’” Kathleen McIntosh said.

And if someone makes a mistake – such as using the wrong garnish or not cutting enough ribs for all the judges – they must be judged as a “1” by all judges.

Traditionally at KCBS competitions, there are tables of six judges, depending on the size of the competition. They judge chicken, ribs, pork and brisket.

Terryl Miller came all the way from Utah to earn her judging degree. “I’m very involved in food, and I just wanted to get more involved in barbecue,” she says. She is already a judge at the World Food Championship and won a national Dutch Oven competition.

In addition to learning how difficult it is to cook good barbecue chicken, the students discovered the many roles judges can take at competitions: from table captains to contest representatives, contest organizers and judges’ coordinator. There are also different levels of judges, which require a lot of experience either participating in or judging competitions.

All of this is heralding a new era in Clayton’s own competition. According to Rory Richmond, the event coordinator and the CBCA member who brought the judging class to Clayton, things are going to be different the weekend of Aug. 6.

For the 2016 Rib Cook-off, the venue is changing from the Clayton Club parking lot to Main Street. “This will allow us an opportunity to have a few beer vendors and some barbecue-related vendors,” Richmond said. There will be an expanded Kiddieland and live music in the Grove Park.

But most importantly, for contestants and barbecue aficionados, there will be two competitions: one for “backyard” competitors, run similarly to past events, and a KCBS “pro” competition for more seasoned and professional barbecue enterprises. In addition, the teams will be cooking both chicken and ribs, where in the past teams have only cooked ribs.

Many of the people who received their judging certificates will be able to volunteer, Richmond noted.

The food being prepared by the competitors won’t be available for public consumption. But there will be food available for purchase, prepared by professional barbecue vendors. More information about the Barbecue Cook-off will be coming in the July issue of the Pioneer.