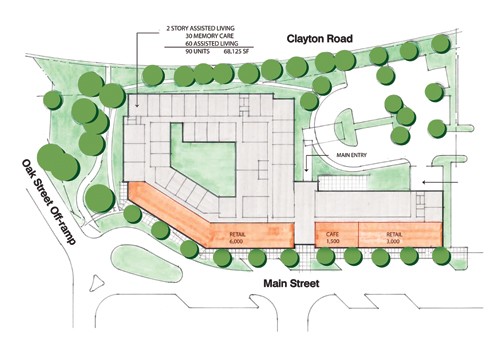 After two years of marketing the vacant lot in the Town Center, the city has struck a deal with Pacific Union Land Investors who is also buying the adjacent church property. Pacific Union will combine the two parcels and proposes a senior assisted living facility and 10,500 sq. ft. of retail space fronting Main Street.

At long last, Clayton is on the way to seeing some commercial action in the Town Center. A Danville developer is literally doubling down on downtown with the purchase of two parcels on Main Street owned by the city of Clayton and Clayton Community Church.

Pacific Union Land Investors, LLC has signed an Exclusive Negotiation Agreement (ENA) with the city of Clayton to purchase its 1.67 acres on Main Street for $1.65 million. At the same time, Pacific Union has signed a Letter of Intent to buy Clayton Community Church’s adjacent parcel — approximately 0.8 acre.

The two parcels combined will be the site of a 90-unit senior residential facility and about 10,500 sq. ft. of commercial space fronting Main Street.

While not exactly the bustling “Sonoma-like” retail center many had hoped for, the project will bring up to eight storefronts for small businesses and much-needed tax revenue to city coffers.

“We hope to attract local-serving tenants, including perhaps a wine tasting shop, ice cream parlor or other users that will … supplement the downtown experience,” said Chris Garwood, vice president of community and multi-family development for Pacific Union Land in an email to the Pioneer.

The shops will be wide and shallow with glass storefronts. Behind them will be a 60-unit assisted living facility and a 30-unit memory care unit. The two-story residential project should mean 100-110 residents at full occupancy, Garwood said.

The long and tortured path to development of the 2.4 acres in the Town Center began in 2007 with the church’s surprise purchase of the 1.67-acre parcel from local developer Dick Buscaglia. A disgruntled Buscaglia sold the property to the church after the city denied his application for an office building because it didn’t conform to the Town Center Specific Plan (TCSP).

The church already owned the adjacent parcel, where they maintained administrative offices in the old Pioneer Inn building. With the Buscaglia acquisition, the church would have enough property to build a 42,000 sq. ft. complex with a sanctuary, community center, retail space and offices on the combined 2.4 acres.

The community offered fierce resistance to an application for the project submitted to the city in 2009. Major objections were raised about congestion, traffic and the sheer size of the project.

In 2012, CCC abandoned their plans for the downtown worship complex and bought 4.5 acres at the end of Pine Hollow Road next to Mt. Diablo Elementary School. In 2013, they sold the 1.67-acre parcel back to the city for $1 million.

With Pacific Union’s purchase of their remaining parcel for $1.095 million, CCC pastor Shawn Robinson says he will move ahead with plans to build a scaled-down version of their “dream home” on the hill property.

“We’ve been searching for a home for 20 years,” said an optimistic Robinson. “I think this is it, and it actually fits our budget.”

The sale must be finalized by Sept. 15, after which Robinson will move ahead with the new church. Since 1996, the church has been holding Sunday services at Diablo View Middle School.

After buying back the 1.67 acres from CCC, the city began a vigorous effort to entice interest in commercial development. Despite concerted and enthusiastic marketing efforts by the real estate company, Transwestern Property Co. West, no one was interested.

Broker Ed Del Beccaro contacted more than 650 retailers, and all had the same response. Not enough land, not enough traffic, not enough people. Hopes for a Trader Joe’s faded.

“While most Claytonians enjoy the quaintness and nostalgia of our city, those same variables severely detract from its appeal and viability as a commercial retail market,” says city manager Gary Napper. “It’s often acknowledged that the business of Clayton is residential.”

Under the terms of the ENA, Pacific Union has until Nov. 1 to finalize purchase terms and submit the Initial Application.

“Change in title ownership is not accomplished by the ENA,” says Napper. “But that will occur when Pacific Union is ready to pull its approved building permits.”

The project will then enter the public review process, which could take as long as two years before any actual construction can start.
“The ENA provides the roadmap,” says Napper.