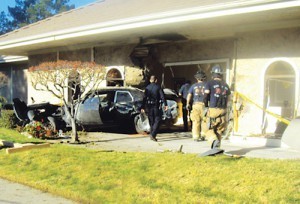 Ouimet Brothers Funeral Home spent the New Year’s holiday boarding up and mopping up after a car crashed into the front of the building during a funeral service on Dec. 30.

Mourners were seated inside the chapel for a 1 p.m. funeral and the lobby was fortunately empty when an out-of-control 1974 Chevrolet Nova careened across the sidewalk and crashed into the front entrance at 4125 Clayton Road. A 66-year-old man who was inside the chapel suffered a broken leg and the 16-year-old driver and his passenger were taken to local hospitals with serious injuries.

Witnesses say the driver of the Nova was racing with another teen on Clayton Road when he lost control. Ouimet Managing Partner Michael Nicosia said the Nova hit the building so hard that the car’s battery was ejected and thrown to the south side of the building.

The crash was “unbelievable,” said Nicosia. “It so easily could have been a real catastrophe, but thankfully no one was killed and the building can be fixed.”

Although the crash caused an estimated $50,000 damage and the entrance is boarded up, Nicosia said other churches and funeral homes have stepped up to offer their facilities while repairs are underway.

A visitation and viewing for Clayton Pioneer photographer Michael Dunn, scheduled for 5 p.m. that day, was quickly relocated to the Salvation Army chapel across the street.
“The community has been right there for us,” he said.

Nicosia says the repairs will take about three weeks.